The Boy With The Arab Strap, originally released on 7th September 1998, will be available on transparent green vinyl through Jeepster on June 12th 2021 exclusively for Record Store Day.

The album is released on gatefold-vinyl (JPRLP003RSD) and is distributed by Republic of Music. Whilst no single was released from the album at the time, the eponymous title track has become one of the most popular Belle & Sebastian songs and an iconic symbol of the live shows; no Belle & Sebastian show is over until the band are joined by their fans onstage as they dance to ‘The Boy With The Arab Strap’. The album was recorded in Glasgow at CaVa Studios during 1998. Videos were made at that time for Is It Wicked Not To Care and Dirty Dream #2 (directed by Lance Bangs). Joining Stuart Murdoch on song writing duties on this album for the first time were band members Stevie Jackson, Isobel Campbell and Stuart David. 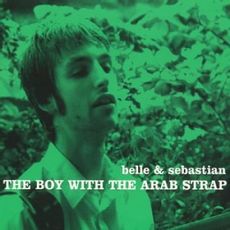