First released in 2011, 'Abbab ubba' is a collection of remixes, reworkings and B-sides from legendary Pixies' frontman Black Francis.

The album gathers together recordings made between 2008 and 2010 when Charles Thompson returned to his iconic Black Francis moniker. Highlights include Bloc Party's remix of 'The Seus', plus rarities 'Il Cuchaiao' and 'The Water' whuch were previously exclusive to the Black Francis' website. Released on vinyl for the very first time, and pressed on heavyweight 180g black and white split colour vinyl exclusively for Record Store Day 2021. 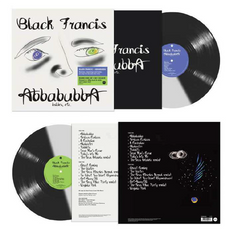