Jerry Dammers is the founder member of The Specials and 2 Tone Records. This release will be his only second release under his name, the other being featured on the soundtrack to the 1986 film ‘Absolute Beginners’. These two previously unreleased recordings are Jerry’s home recordings made on cassette in 1980/1982. This is a rare glimpse into his working practice including arguably The Specials most famous recording ‘Ghost Town’, which celebrates its 40th Anniversary in July this year. 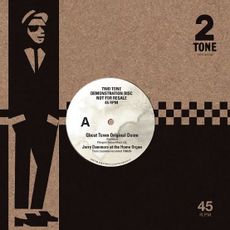