Within a year of her ground breaking Double Album “Bad Girls” Donna Summer left Casablanca Records to become the first Artist signed to the new Geffen Records label • Always ready to embrace new sounds and experiment with different musical genres, Donna Summer’s 1991 album “MISTAKEN IDENTITY” was released on Atlantic Records and produced by Keith Diamond who was brought in to inject a more street style, which was prevalent at that time • Keith Diamond had produced highly successful singles and albums for Billy Ocean, Michael Bolton, Mick Jagger, Sheena Easton, Don Johnson and James Ingram the latter having been heavily involved with Donna’s 1982 album ‘Donna Summer’ • The album includes the singles ‘Work That Magic’ and ‘When Love Cries’ as well as the tracks ‘Cry Of A Waking Heart’ and ‘Heaven’s Just A Whisper Away’ which showed how her amazing vocals could make very good contemporary songs sound great 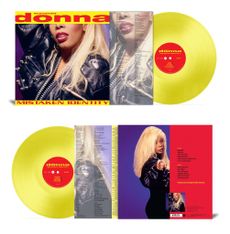