A Song For Those Who Speed In Built-Up Areas


JOHN - the virtually ungoogleable moniker for London duo John Newton (drums, lead vocals) and Johnny Healey (guitar, backing vocals) - return with a new single 'A Song For Those Who Speed In Built-Up Areas'.

The 7" is the first release from the band since their second LP, 2019's Out Here On The Fringes, which catapulted them into the Top 40 of the UK Independent Vinyl Chart as well as being featured as an Album of the Day on BBC 6Music with three successive playlisted singles. 'A Song For Those Who Speed In Built-Up Areas' makes for an engulfing return: a titanic, whirring beast that gestures towards the stranglehold of individualism currently engrained in our present. Speaking of the track, the band offer: “We had the title written down for quite a few years, and it seemed to perfectly fit the sentiment and structure of the music as lyrics. These words guided us to a narrative image: a driver who is so wrapped up in themselves and their journey that they don’t seem to realise that the car is slowly filling with water. I guess it can be read as a slightly barbed reminder to have a sense of responsibility within the world, especially amongst constant calls for individual self-improvement. "Musically, the tempo is rather consistent, perhaps less frenetic than some of our past material, and we recognised and enjoyed this difference. Using ‘less is more’ as our mantra, we were interested in the way the track could gradually carve itself from a pretty constant groove, a bit like a car meandering on a long journey.” The single comes accompanied by a video that traces the journey of the JOHN's signature lightbox to a live show, touching upon the day-to-day life for a working, touring band. Meanwhile, on the 7"'s b-side, you'll find a live session version of the song recorded in December 2020. Without the chance to road-test new material, the band decided to make a visit to The Bookhouse Studio in South London to capture the track in lieu of live opportunities. Having established an international presence with a blistering KEXP live session and a month-long journey through Europe in support of Out Here On The Fringes, JOHN return to the live stage in 2021 with a mammoth run of UK and Irish dates throughout the autumn of this year (see further below for full details), preceded by two socially distanced shows at London's Studio 9294 next month. As venues begin to reopen, it offers a captivating chance to catch a band who've built a devoted following through the sheer energy of their live show: a celebration of the primal intensity of the guitar-drums duo as a format and a monument to idiosyncrasy. 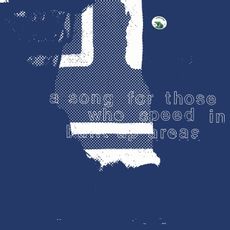