David Bowie, live from Praça da Apoteose, Rio de Janeiro, Brazil 20th September 1990 The “Sound + Vision” tour, 1990: a seven-month venture that opened in Quebec City in early March, shuttled back and forth across the Atlantic for months (and across the Pacific to Japan for a week) and closed on a late September night in Buenos Aires.

The tour served in laying his back catalogue to rest through Rykodisc and with it, the ghosts of Ziggy and Major Tom. For Bowie, the progressive and visionary genius, his next project would be his driving force rather than dwelling in the past, but Bowie, ever the consummate artist, shared professionalism with a sense of convivial adventure and ensured his fans were entertained. Protus proudly presents, David Bowie, live from Praça da Apoteose, Rio de Janeiro, Brazil 20th September 1990 on the ‘Sound + Vision’ tour, performing hits and rarities from the last three decades. Professionally re-mastered original TV Globo broadcast with background liners and timeline photos. 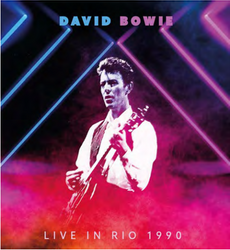