.. and music!!!  This edition mercilessly continues what was started in the predecessors, 'Banana Split' (BCD17513), 'Another Banana Split, Please' (BCD17601) and 'Good Old Summertime' (BCD17528) by Bear Family.  On 31 tracks from 1952‐1963, the most beautiful season of the year comes extremely alive, whether as a 'soundtrack' in the car or as a musical enhancement of the garden party!  You’ll hear classics of famous artists, for example songs by Keely Smith, Dinah Washington, Conway Twitty, The Brothers Four or Hank Snow!  On the other hand, we present plenty of recordings from the rarities box, some appear here for the first time on CD!  Instrumentals by the Viscounts or by Tito Puente with a summery Latin flair can be heard as well as early surf sounds by Dave York & The Beachcombers or The Fleetwoods!  The musical range is wide: from pop to jazz, rhythm 'n' blues, doo‐wop, country music and lots of rock 'n' roll, with Ricky Dean, Johnny O'Neill, Sammy Salvo, Paul Peek and many others!  The 20‐page color booklet includes notes by producer Marc Mittelacher on each song and many photos and illustrations, some of which are rare Summer Days & Summer Nights What could be better than dreaming of summer?! Of the sun and the beach, the warm sand and the subsequent cooling bath in the sea. Or the warm summer nights under the blue moon in the nature smelling of blossoms. Would you enjoy a warm summer breeze? The themes surrounding the most beautiful season of the year are almost immeasurable. This is shown especially in the music on Bear Family's already fourth summer compilation! The perfect soundtrack, suitable for all summer activities! Put On A Happy Face Put On A Happy Face demands the legendary crooner Tony Bennett right at the beginning and fitting for the summer. Bennett, like Eydie Gorme and Don Cherry, is on the roster of pop artists in this compilation. There are also classics by the Brothers Four, Keely Smith, Tito Puente and others. Things get jazzy with the famous Barney Kessel, and the country music realm is covered by Bobby Williamson and Hank Snow. R&B and doo‐wop are included with artists like T.J. Fowler and The Quotations, as well as hot rock 'n' roll from Sammy Salvo, Bucky & Premieres, South African Dickie Loader and Paul Peek of Gene Vincent's Blue Caps, among others. To match the previous CDs, this compilation also ends with the classic Good Old Summertime, here in the rare interpretation by Lee Diamond with the Challengers, released on the small label Lola! The CD includes a 20‐page color booklet with notes on each song, compiled and written by Marc Mittelacher, as well as many photos and illustrations, some of them rare 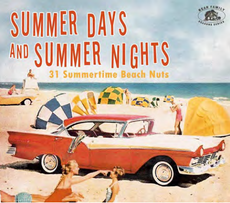