UB40 is the biggest selling, top touring Reggae band in the world! Before there was No Doubt there was UB40.

Before there was Sublime, there was UB40. Before any of the dozens and dozens of Ska, Reggae, and Jam bands bombarded the music scene with their version of Reggae Rock, there was UB40. In spring of 2021 UB40’s new collaborations album Bigga Baggariddim, the follow up to the band’s critically acclaimed and internationally successful 1985 release Baggariddim, will be released. Bigga Baggariddim is an international celebration of Reggae, featuring New Zealand’s House of Shem, India’s Reggae Rajahs, reggae veterans Inner Circle, Tippa Irie, and Winston Francis, and up-comers Gilly G, Kioko, BLVK H3RO, and Leno Banton. The album also includes tracks with Pablo Rider and Slinger, who both featured on the 1985 Baggariddim album. 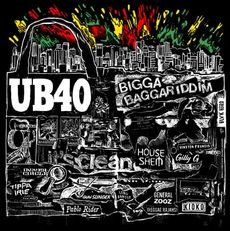