It was a damned Good Friday, as Easter 2021 saw the return of noirish alt.goth roustabouts DESPERATE JOURNALIST, who piled back into the eerily empty marketplace with a brand new single called ‘Fault’ on April 2nd. ‘Fault’ is the first track to be hauled from Desperate Journalist’s thoroughly forthright fourth album, ‘Maximum Sorrow!’, recorded entirely in Crouch End in the midst of the Covid pandemic and due for release on a multitude of formats on July 2nd. Driven along by Simon Drowner’s ear-popping bassline, ‘Fault’ finds the quartet in impeccably brutalist form, all banshee howls and self-lacerating lyrics from singer Jo Bevan: “And those teenage hangups are hard to beat / When your closet is piled up with defeat,” she snaps at one especially prickly point, as alongside her guitarist Rob Hardy and drummer Caz Hellbent can only add fiery fuel to the sonic flamings. It fits, too: like much of the rest of the album 'Fault' is both playful and, like the finest public house pint glass, half-full of rage; where swirling 'Heart Of Glass' synths are serenaded by shattered lyrics and 'Poison Pen' manages to put down put-down lines like: "You are oh so tall and sesquipedalian," without somehow sounding like a pompous arse. Because this is Desperate Journalist in hyper-dynamic form, super sleek, but never sickly slick; ambitious and expansive, but still self-effacingly DIY to the core. If the 'Maximum Sorrow!' title is punchy then the music ripples with alt.rock muscle built up over seven years of relentless gigging and releases, like a fierce panther on the prowl. There are traditional desperate journeys to the heart of darkness - check the doomily concise disintegrations of 'Armageddon' for starters. And there are brilliantly-lit light touches: the swooning elegance of 'Utopia', the sardonic melody rushing sass of 'Personality Girlfriend', the madrigal calm of 'Formaldehyde', a tragic finale on any other album but the opener here. Verily, this is the band with the child in its eyes. Kudos too to the epic choral thrustings of 'Everything You Wanted' and the spectacularly bittersweet yearnings of 'What You're Scared Of', strewn with scattered sugarcubes. In the olden golden days of gigs we would have called these songs Showstoppers, which is pretty impressive when you consider Desperate Journalist haven't stopped to play a show for roughly 18 months. In fact, what really strikes home is that the wholesome whole of ‘Maximum Sorrow!' sounds so exuberant and alive but as it was entirely created within the coronic confines of a lockdown it has never actually been played live – now that really does take some creative skillings. We hear that post-punk made it into the springtime pages of The Sunday Times. Oh, DO keep up - Desperate Journalist have been raging against the corporate machine for what feels like aeons with their melodramatic blend of traumatised guitars and artbroken vocals. In fact, ‘Massive Sorrow!’ will represent their fourth full album release in the six years since the devilish ‘Desperate Journalist’ debut appeared in 2015. Stroppy sophomore effort ‘Grow Up’ stormed out in 2017, while 2019 saw the search for the stellar ‘The Search For The Miraculous' spread far and wide. Throw in a couple of lively five-track EPs (‘Good Luck’ and ‘You Get Used To It’) and their melody-shattering proficiency is apparent for all to see. Add a litany of ten-out-of-ten media reviews and utterly devotional followings from desperate fanboys and fangirls from Birmingham to Berlin and Desperate Journalist’s incredibly credible status is more bulletproof than ever before. 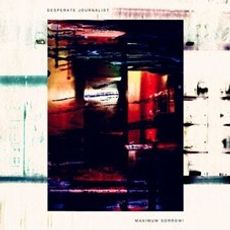