HELL IN THE BARN - LIVE!


25 years of Lou Cifer & The Hellions ‐ from all over Europe and England fans and friends came to Oberhausen, Germany, to celebrate the event.

When the band played the live show on the occasion of their anniversary, none of the Teds, Rockers and Rockabillies knew that this would be one of the last concerts of the Rock & Roll scene before a nasty plague hit the world with all its force. After that nothing went on for a long time. For many this evening remains unforgettable. It's just wonderful that this fabulous live performance is now available on LP and CD. Some claim that Lou Cifer and the Hellions are actually a live band, or that the songs at least develop a very unique dynamic when played in front of an enthusiastic audience. Time and again, private live footage of the band's performances is in circulation. This is usually done with good intentions, but often the recordings reveal a questionable quality. The live recorded tracks were professionally processed, carefully mixed and mastered afterwards. Hence, we can now release these tracks in exceptionally good quality. The boys' joy of playing was well captured. But not at least , a show lives from the audience, and that comes across very well on these songs, too. The particular club atmosphere in the Druckluft'is also evidenced by the ambient photos in the booklet 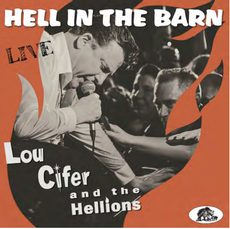