While the band swept across the stage, Gene (handicapped in the leg by an accident) was "tied" to the microphone stand. His cat‐like movements around the mic stand and a song with just that title made him the 'Cat Man'. This was further solidified when Gene began performing in black leather in 1960, copied from the British Vince Taylor, who is also represented here. Gene's European presence through numerous tours explains why huge numbers of combos in Europe covered Gene Vincent’s music. Be‐Bop‐A‐Lula Be‐Bop‐A‐Lula remains Gene Vincent's biggest hit, a rock'n'roll classic to be heard here in several different versions. Moreover, Vincent did record this song several times throughout his career. But Gene Vincent is much more than just 'Mr. Be‐Bop‐A‐Lula'! This compilation proves this with original versions of songs Gene recorded later, such as Woman Love by Jimmy Johnson, Hadda Brooks' Jump Back, Honey, Jump Back, or Milt Trenier's I'm Gonna Catch Me A Rat. Gene Vincent himself has been covered extensively. We've compiled the most interesting versions here, including a rare live recording by Wee Willie Harris from Portuguese television in 1959 ‐ first time on CD. Also very nice are the two Steve Drexel recordings related to the movie 'Hot Rod Gang', starring Drexel and Gene Vincent. 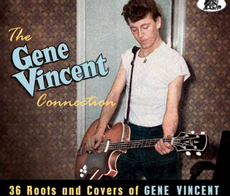