Mad Not Mad is the sixth studio album by Madness.

Originally released in September 1985, it marked a departure from the band’s original line-up, with keyboard player Mike Barson taking a break from the group after an astonishingly successful run of five hit albums in as many years. Style-wise Mad Not Mad presented a more polished side of Madness and contains some of their most sophisticated and political song-writing. The first single, ‘Yesterday’s Men’ finds the band in a smooth, reflective mood, dealing with the dispossessed characters in and around Camden Town, and ’Sweetest Girl’ is a cover of the iconic Scritti Politti track, while ‘Uncle Sam’ is a classic Madness romp relayed through the narrative of a soldier’s experiences during World War II. Within a few weeks of its initial release, NME listed ‘Mad Not Mad’ at number 55 on their list of the “100 Best Albums Of All Time” and it remains in its 2015 list of the “50 Best Albums Released in 1985”. 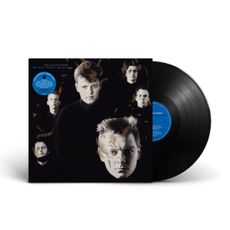