KID A MNESIA - A Book of Radiohead Artwork


An ultimate glimpse into the intense creative relationship that developed between the musician & artist, published to mark the 20th anniversary of Radiohead’s illustrious Kid A & Amnesiac albums.

A celebration of the process and artwork created for the Radiohead albums Kid A and Amnesiac. Whilst these records were being conceived, rehearsed, recorded and produced, Thom Yorke and Stanley Donwood made hundreds of images. These ranged from obsessive, insomniac scrawls in biro to six-foot-square painted canvases, from scissors-and-glue collages to immense digital landscapes. They utilised every medium they could find, from sticks and knives to the emerging digital technologies. The work chronicles their obsessions at the time: minotaurs, genocide, maps, globalisation, monsters, pylons, dams, volcanoes, locusts, lightning, helicopters, Hiroshima, show homes and ring roads. What emerges is a deeply strange portrait of the years at the commencement of this century. A time that seems an age ago – but so much remains the same. 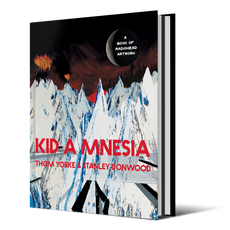