Originally from Limerick, O’Brien’s work captures the everyday and the inbetween in a way that transcends any genre label.

Writing from her own observations, O’Brien’s influences can be found in the realism of Mark E. Smith of The Fall, Patti Smith and The Slits, and the works of literary icons such Frank O’Hara, W.B. Yeats, Joan Didion and Albert Camus. Releases to date have drawn admiration from British and American outlets and radio stations as diverse as The FADER, Stereogum, The Guardian, Loud And Quiet, The Quietus, BBC Radio 1 and BBC Radio 6 Music, and more. Speaking about the new single, O’Brien explains: “‘Most Modern Painting’ is about the creation and maintenance of ‘the self’ - the most epic task we are faced with in our lives. I wanted to work with structure in an unconventional way, linking the movements together using various voices from the narrative. The lyrics are voiced through a dialogue between the conscious and unconscious, through dream recall, memory, the individual and the ego.” The accompanying music video for ‘Most Modern Painting’ was shot in a film-like manner on 16mm. Directed by Saskia Dixie, the movements are intrinsically linked to the lyrics; the choreography incorporates physical theatre, dance and elements of daily gestures and habits. The chorus line on ‘Most Modern Painting’ birthed the title for the EP ‘Drowning In Blessings’ - “The more I said it, the more it meant. It’s an image which I find really cathartic; seeing the weight or build up of things as possibilities and opportunities instead of bearing their burdens. I approached the set of songs on the EP like a short album so the body of work feels full and tells a substantial story. Tracks allude and refer to one another and provide clues and hints to the future and to the past. It’s not only about language and music - it’s about energy, spaces, leaving room for other people to get in.” A multifaceted artist, O’Brien’s writing has also been published by the esteemed London Magazine whose alumni include T.S. Eliot, Sylvia Plath and William Burroughs. Her unique fusion of spoken lyrics and art rock has piqued the attention of luminaries of both fields, seeing her perform with John Cooper Clarke and The Brian Jonestown Massacre at sold out theatres across the U.K. Playing live with her band and collaborators; Julian Hanson (guitar) and Oscar Robertson (drums), Sinead O’Brien’s transfixing performances are placing her at the forefront of a resurgent wave of independent British and Irish talent. 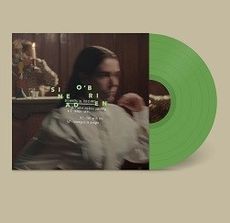