After doing the CD reissue of „Mind Control“, Sulatron Records now release the new studio album of the neo-psych veterans: „Made In The Machine“ is kind of a follow up of „Mind Control“ – it explores the same themes but delves even deeper into the surrealistic worlds of sci-fi and space rock, including hints of early kraut and dark psych music.

But it still retains the classic elements of the well known Sun Dial sound which is mainly Gary Ramons guitar work and the band’s psychedelic trademark. For Sun Dial themselves it has been a labour of love and they say it’s their most focussed and vibrant album so far. Sun Dial were founded 1990 by multi-instrumentalist Gary Ramon who also plays in several other bands and projects. He also runs the well known Acme-records label. John Sinclair, the legendary activist and manager of the MC5 declared Sun Dial to be a modern day rarity as they have never compromised and have always done things on their own terms. Sun Dial’s debut album „Other Way Out“ was a true impact in the psychedelic music scene and is still a highly rated album! 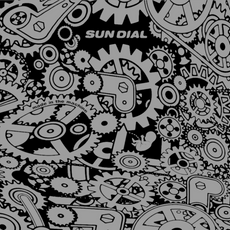