On this record first, there is electronic music on „real CD“ of this psychedelic-rockmusician! 5 long, ambient but rhythmic instrumental tracks, which seem to be made for the „Space Night“ (BR3 Television)! The songs are named in dedication to some Science-Fiction B-Movie-Heroes. Dave Schmidt aka Sula Bassana plays all instruments by himself again, these are: synthesizer, sequencer, drummachines, guitars and mouthharp. All these tunes Sula produced into his little studio. After that, the songs got mastered by the krautrock legend Eroc. The album was released before in a little changed form as CD-R in very small quantities, called „Sulatronics 2“. There was much positive feedback, so Sula decided to grow this record into a real CD release. 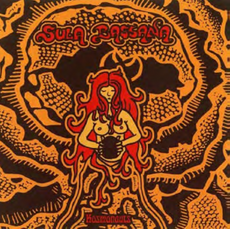