The complete Treasure Isle works of a Jamaican legend Although largely unreported by the mainstream popular press, 17 February 2021 witnessed the passing of a true great of popular music: Asman Euwart Beckford. Under his stage name of U Roy, Beckford revolutionised the Jamaican music industry and in so doing also heavily influenced the development of hip hop, jungle and grime. In 1970, the immense popularity of his ground-breaking 7” singles for Treasure Isle boss, Duke Reid popularised DJ recordings, and sparked an explosion of similarly-styled discs, performed by a plethora of established and wanna-be toasters. Over the next year or two, U Roy continued to record high quality works for Reid, who gathered many of the DJ’s most popular sides on two best-selling long-players, ‘Version Galore’ and the eponymously titled ‘U Roy’, issued in 1971 and 1993, respectively. In tribute to the man and his music, both of these seminal collections have finally been brought together, along with the remainder of his Treasure Isle singles and a number of rare alternate takes. These historic recordings, which forever changed the sound of reggae, demonstrate the inimitable style that resulted in U Roy becoming the world’s first DJ superstar. 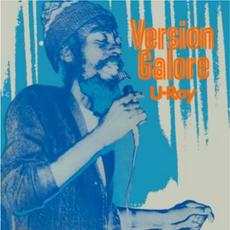