The concept album is themed around space physics. The title is based on a planet’s albedo; the proportion of the light it receives that is reflected back into space. Albedo 0.39 features tracks “Pulstar” and “Alpha” and became his first album that reached #18 of the UK Album Charts. Vangelis played every instrument on the record, which resulted in effective and versatile synthesizer passages. Critics describe the tracks as mesmerizing trips of assorted rhythms that include elements of jazz and mild rock. The multiple-award winning composer of electronic, progressive, orchestral and jazz music Vangelis started his career working on numerous successful projects, such as Aphrodite’s Child, a collaboration with Yes lead singer Jon Anderson and award winning soundtracks for Missing (1982), Chariots of Fire (1981), Blade Runner (1982) and 1492: Conquest of Paradise (1992). He composed over 50 albums and is still creative in developing new concepts. 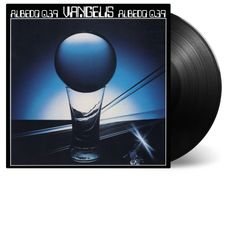