from a hidden door comes the strains of The Monochrome Set's 16th album, with its elegantly crafted pop songs, ornate melodies, sumptuous lyrics, all performed superbly by a rare and legendary band.

Having amassed a formidable catalogue of releases on a number of key labels over 5 decades, including Rough Trade, Dindisc and Cherry Red, The Monochrome Set are ready to release their new studio album on Tapete Records - the bands home for the last eight years and five albums. The indie pop veterans have been hard to pin down over this time. Their instantly recognisable sound and darkly hilarious lyrics have always set them apart. Bid's cerebral Brit wit spikiness and debonair tones melded to infectious melodies and deft songcraft of a cinematic and literary quality has been quietly influential over a diverse set of artists since their inception and throughout different stages of their career so they can count the likes of Graham Coxon, Iggy Pop, Alex Kapranos, Neil Hannon, Johnny Marr and Jarvis Cocker as fans. Bid is joined in The Monochrome Set by fellow original Andy Warren on bass, Mike Urban on drums and newest recruit Athen Ayren on keyboards. For the album recording Alice Healey brovides backing vocals with Karen Yarnell on percussion and Jon Clayton, additional instrumentation. The album was recorded at OneCat Studio in London, engineered by Jon Clayton and produced by Jon Clayton and Bid and will be released by Tapete Records on 11th March 2022. After an aeon spent in infinitely old cities of the body and mind, a magical creature glides back into its bedroom.It has been changed forever - what once was human is now a higher being, an unnatural force, the new perfect. It can still feel the exulting gaze of The Eye upon its back- thousands of years of brooding, planning, in deep, dark, secret places, waiting for the stars to align, the ideal body to infuse. The air around it spits ferociously; the whines of the weak still sing in its ears, like the pathetic squeaks of old curtains as they are closed forever. It stands before the full length mirror, its reflection now clouded with dust. A lifetime of waiting; my poor mirror, here I am, I will clean you! It picks up a cloth and wipes across the glass triumphantly! Strange. It looks the same as before it left, all that time ago. A naked old man. 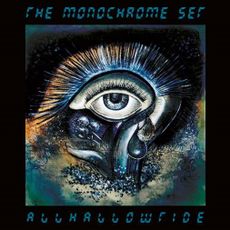