Though most debuts are the culmination of a lifetime of influences and experiences, few artists succeed in mapping their musical journey quite as vividly as Baba Ali has on ‘Memory Device’.

Tracing his Nigerian heritage, an adolescence absorbing No Wave and the hip-hop on NYC’s Hot 97, time immersed in the techno scene in Berlin, and the experimental punk spirit of his current base in London, ‘Memory Device’ is an enthralling introduction to a musician who resolutely defies pigeonholing. Written during lockdown, and recorded with Al Doyle (LCD Soundsystem, Hot Chip) in East London, ‘Memory Device’ is both a dizzyingly inventive exploration of Baba’s complex musical DNA, and a thought-provoking treatise on the collective angst of modern existence; a dance record dealing in small ‘p’ politics that, spiritually, has been three decades in the making. It was after moving to London that he began writing new music as a solo artist, with his debut EP, ‘Nomad’, released in 2017. Soon after he met British guitarist Nik Balchin while they were working together at a bar in Whitechapel. The new collaboration resulted in the February 2020 release, ‘This House’, an eclectic four-track collection fusing funk, blues and soul, and featuring production from Jamie Hince of The Kills. In July the same year the duo released an unofficial mixtape, ‘Rethinking Sensual Pleasure’, which they wrote while locked down together at Baba’s parents’ house in New Jersey. Today Baba describes this process of producing a longer body of work as being akin to “ripping a Band-Aid off,” giving them the confidence to begin writing their debut. Work on ‘Memory Device’ began shortly afterwards, culminating in the pair recording the album between November 2020 and February 2021 with Al Doyle, who was chosen for his vast experience operating at the intersection between dance and rock music. 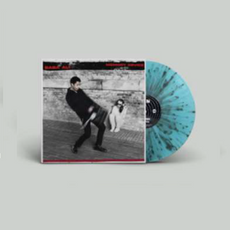