VERY rare and sought-after 1968 debut album from legendary British singer (still active mainly in the blues idoim), only ever issued in the USA.

Includes two previously unavailable tracks that were included on a UK test pressing, which as close as this album got it to being issued outside the US.Foolish Seasons’: Dana Gillespie’s first album makes its U.K. vinyl debut in this special RSD release of one of the great lost albums of 1960s British pop. This VERY rare and sought-after 1968 album from the legendary British singer-songwriter was only ever issued in the U.S. and over the years the LP’s reputation amongst collectors has grown with original copies now routinely selling for three figure sums. Although it never came out in England, Decca kept the masters to the intended U.K. pressing which contained two previously unreleased self-penned tracks; the blue-eyed soul bop ‘Goin’ Round in Circles’ and the orchestral ‘Come To My Arms’ which could almost have been a Bond theme. Dana would eventually become known as a blues singer, but at the outset of her recording career, her sound is an excellent barometer of what was happening on the swinging-London music scene, with the breezy psych-pop of ‘You Just Gotta Know My Mind’, a Donovan composition that he himself never recorded, the Marianne Faithfull-esque chamber-folk of ‘Tears in My Eyes’ and the Françoise Hardy sounding ‘Souvenirs of Stefan’. Other highlights are the orchestral sunshine pop of ‘Life Is Short’ and ‘London Social Degree’, both penned by cult British pop/rocker Billy Nicholls; the gothic blues of ‘Dead’, and an eccentric cover of Richard Fariña's ‘Hard Lovin' Loser’. Dana's own compositions also stand out, particularly the psych-folk title track: In the U.K. Dana was at the vanguard of the immerging female singer-songwriter scene, as the only British female artists publishing and singing their own songs at this point were fellow Decca labelmate Twinkle, Sandy Denny and Christine McVie. Arranged by Mike Vickers of Manfred Mann and produced by Wayne Bickerton, the sound of ‘Foolish Seasons’ is luscious and imaginative. The songs are brought to life by an illustrious group of session musicians including Mike Vickers, and fellow Manfred Mann member Mike Hugg. Big Jim Sullivan who played on David Bowie’s first album on Deram, and Blue Mink founder Herbie Flowers on bass. These were joined by John Paul Jones and Jimmy Page, who only a few years later would have their own band Led Zeppelin. All tracks have been remastered from the original tapes, and this special RSD release comes in a gatefold sleeve with notes by Dana and new artwork featuring photographs taken by legendary rock photographer Gered Mankowitz who shot the original U.S album cover. 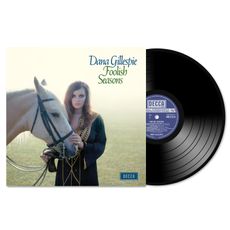