First physical release on any format for the 45th Anniversary of this wonderful live show.

First time on vinyl for this 45th anniversary edition of Ultravox! live at the Rainbow Theatre, London – February 1977 Featuring the original line-up of John Foxx on vocals & harmonica, Billy Currie on keyboards & violin, Stevie Shears on guitar, Chris Cross on bass and Warren Cann on drums. First time on vinyl for 3 songs that didn’t make it on to the band’s eponymous debut album: “I Came Back Here To Meet You”, “T.V. Orphans” and “I Won’t Play Your Game”. **Please note that due to the shorter running time of this release that we have cut the album at 45RPM for a greater audio experience. 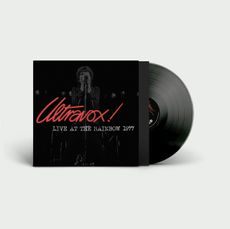