Locked Down And Stripped Back Volume Two


t'Present are back with volume 2 of their lockdown sessions, delving deeper into their back catalogue and pulling out even more pearls.

Locked Down And Stripped Back Volume Two features home recordings of Wedding Present classics along with a previously unreleased song: ‘That Would Only Happen In A Movie’.The first volume in the series came about when David Gedge’s annual festival At The Edge Of The Sea went ‘virtual’ in 2020 and the band recorded semi-acoustic versions of songs to be streamed. An album of the tracks was compiled and released due to popular demand. The same thing happened the following year and so Volume Two features tracks initially recorded for 2021’s online festival. There’s a bevy of guest stars on this second album! Jon Stewart [of Platinum-album-selling Sleeper fame] reprises his new role as Wedding Present guitarist but is joined here by some Wedding Present members of old. Peter Solowka, from the band’s first line-up appears on ‘Nobody’s Twisting Your Arm’ playing his second instrument, the accordion, while Hit Parade guitarist Paul Dorrington contributes to a re-working of the Top 30 single ‘Blue Eyes’. Long-time Wedding Present bass player Terry de Castro returns to infuse the album with her own unique style, while current Wedding Present bass player Melanie Howard takes over the lead vocal duties on a beautiful version of 1986’s ‘At The Edge Of The Sea’. Last, but certainly not least, Amelia Fletcher – backing vocalist on George Best and Bizarro – also returns to the party! As on the first volume, each musician recorded and filmed their parts at home and, as before, it is fascinating to see how stripped-back arrangements bring out different aspects of these brilliant songs. 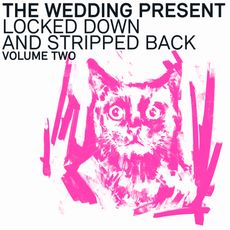