Prior to his untimely passing, Chester personally announced a 2017 Grey Daze reunion on social media.

As he never got the chance to launch the reunion himself, his bandmates, friends, family, and various collaborators stepped up to give the music the second chance it deserved, finishing what the late singer started. The musicians—longtime members Sean Dowdell [drums, backing vocals] and Mace Beyers [bass] as well as Cristin Davis [guitar] recruited in 2017 to tackle this artistic and personal endeavor. A follow up to their critically praised and fan beloved 2020 album “Amends”, this next chapter of music is the completion of their commitment to friendship. For “The Phoenix” the band teamed up with producer Esjay Jones and did a lot of the recording in LA at the iconic Sunset Sound Studios. With this album Esjay and the band really focused on being true to the group's original sound and all their 90s influences. This album continues their mission to tell Chester Bennington's story and also celebrate the amazing artist and person he was. Early song standouts are Saturation, Starting To Fly, Drag, and Anything Anything. Before Chester Bennington sang, screamed, and serenaded audiences of millions throughout his storied career in Linkin Park and a host of other projects, the frontman cut his teeth from 1993 to 1998 in his first proper band: Grey Daze. In 2017, Chester announced the band's reunion which would see the surviving members re-working and re-recording a collection of songs they had started two decades ago. The project was shelved in July 2017. But with the blessing of Chester's family and widow, Talinda, the band regrouped in 2018 and in the summer of 2020 they released “Amends”, the first installment of re-recorded versions paired with Chester’s original vocals. Their recently finished album “The Phoenix” represents an important, yet unheard chapter—the origin story of one of modern rock’s most recognizable voices—and also a full circle moment among friends. 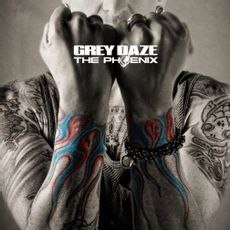