The vinyl album features his great rockers, covered by Elvis Presley and Gene Vincent, among others, and ‐ especially on the bonus CD ‐ a number of obscure yet terrific recordings.

Jerry Reed was multitalented and highly original. He is still remembered for his charming role as Cledus Snow in the ‘Smokey and the Bandit’ movies with his buddy Burt Reynolds. However, others still cherish Reed as the outstanding songwriter and innovative guitar picker he also was. If you don’t know Jerry Reed, you definitely will have heard his songs: JERRY REED THE ROCKIN’ U.S. MALE RELEASE DATE: 10 th June 2022 LABEL: BEAR FAMILY CAT NUMBER: BAF14024 FORMAT: 10” VINYL LP + CD, BOOKLET PRICE: £ 19.99 GENRE: ROCK ‘N’ ROLL BARCODE: 4000127140241 Guitar Man and U.S. Male be Elvis Presley, Crazy Legs by Gene Vincent and his Blue Caps, Lord Mr. Ford by Matchbox, That’s All You Got to Do by Brenda Lee, When I Found You by Big Sandy and his Fly‐Right‐Boys, and – last but not least – his outstanding East Bound and Down from the first Smokey movie. Jerry Reed Hubbard was born in Atlanta, Georgia, on March 20, 1937. He started his outstanding entertainment career with the help of legendary producer Bill Lowery who secured him a three‐year deal with Capitol in 1955. On ‘The Rockin’ U.S. Male’ several of Reed’s up‐tempo favorites are gathered for the first time. The time‐spanning compilation presents Reed favorites as U.S. Male, When I Found You, and You Make It, They Take It with rarer stuff like Twist‐a‐Roo and the anachronistic exotica classic Rockin’ in Bagdad. For the first time – and for the first time on vinyl – Reed’s rockin’ ravers from Capitol, NRC, Columbia, and RCA are presented on a combination platter. It’s hot – and it will go fast! As a special treat, Bear Family Records® dishes in an extra CD with all vinyl tracks, augmented by thirteen extra smokey Reed speeders – amongst them Jerry Reed’s collaboration with Ric Cartey and his dreadnought picking for The Rockateers. 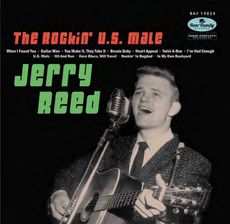