When These Memories Fade


the first ever vinyl box set of the band's material, focusing on a lesser studied part of their story: the singles.

With the involvement of founding member Roger Manning Jr, this set has been curated to include the original run of official US 7” singles, all remastered especially for vinyl as well as a bonus exclusive-to-this-set 7” with the final song the band recorded, a loving tribute to Harry Nilsson. The centre piece to this set is a 64-page booklet featuring a newly written essay by Maura K. Johnston, fascinating track-by-track interviews and reminisces from ex-band members, incredible previously unseen photographs, rare memorabilia and promotional items. The set is rounded off with an exclusive 3D Poster alongside custom Jellyfish 3D Glasses. 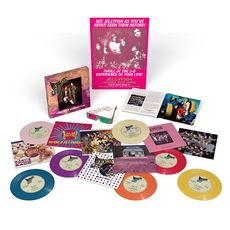 A. The King Is Half-

A. Baby’s Coming Back

B. All I Want Is Everything

A1. Now She Knows

A. I Wanna Stay Home

5. The Ghost At Number

A. The Ghost At Number

B. All Is Forgiven

B. He's My Best Friend

A. No Matter What - Live

B. Think About Your