Blue Luminaire is a new project from British composer Nick Martin, currently based in Copenhagen.

Their father was a classical pianist, and Martin found themselves shunning the mainstream pop that filled the airwaves, and instead gravitated towards obscure 19th Century Russian composers and Brian Eno LPs. This early obsession formed much of Martin’s musical language, and soon they started crafting their own original compositions and experimenting with their vocal range. With interrogation came revelation, and Martin began drifting from the confines of traditional classical music to create something entirely their own. 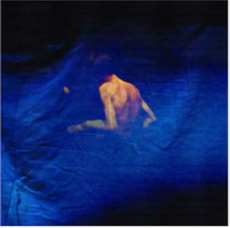