An unconventional three-piece with a defined personality, and a gift for being able to nail a near perfect pop song, Frightened Rabbit convey candid tales of ordinary folk with a wry, acerbic wit via an eloquent, emotive, modern garage-pop aesthetic.

Comprising Scott (vocals, guitar), Billy (guitar, keys), and Grant (Drums, vocals), the origins of the band were rooted in 2003, when Scott began playing solo shows under the name Frightened Rabbit, with his brother Grant joining in 2004, and Billy completing the line-up in 2006. Lyrically ranging from incisive social commentary, to lucid, humourous explorations of interpersonal relationships, Scott’s songs were essentially folk-tinged pop songs with more fervent ambitions. Somewhat atypically there is no bass, but crucially nothing is missing; Billy’s second guitar augments or bolsters Scott’s guitar/vocal hub, or drops an octave to add weight or bottom end. Grant’s drum patterns are alternately or simultaneously physical and adroit, adding accent and eloquence to the score. Recorded by Peter Katis (Mercury Rev, Interpol) over the space of two weeks, and mixed over the ensuing fortnight, ‘Midnight…’ was written with the intention of creating a more ‘pop’ sounding album. Yet although musically more immediate, vitally, the band did not forsake the personality or passion of any of their earlier recordings 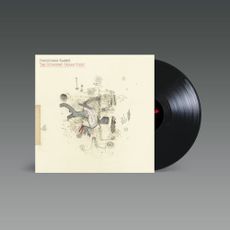