an epic, creeping torrent of tumbling synths that sit between the haunted melodrama of twin peaks & the heightened surrealism of garth marenghi.

Motoring up to Norwich from London, it would be difficult to miss Thetford Forest, the vast wooded wilderness that follows a large section of the A11. Planted between the world wars to ensure a plentiful timber stock, today it’s a managed park attracting picnickers and hikers. But there’s another side to this wood that most day trippers would probably be unaware of… Concretism’s Chris Sharp can often be found walking in Norfolk’s Thetford Forest as he has family over that way. It was on one such walk that he began imagining the story of a beast that roams the area. A little research soon revealed The Thetford Beast was real. Well, you know, real in a folklore way. There’s been many sightings over the years, descriptions of everything from a large cat to a seven-foot ape-like figure. A set of tracks began to take shape, the soundtrack to an imagined children’s “Listen-Along” mystery book (note the inspired Phil Heeks artwork). The song titles follow a narrative... the beast hunters (‘The Thetford Beast Investigation Society’) hold meetings in the forest at night (‘Contact Ritual’), there’s sightings (‘Incident On The A1075’ and ‘The Figure’) and finally strange disappearances (‘The Disappearances’, which is especially chilling). It all comes with the dark edges we’ve come to expect from Concretism. How could it not with subject matter like this? - Neil Mason, Moonbuilding 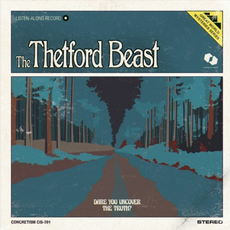