Moonage Daydream – Music from the film


This companion album to the film features songs spanning Bowie’s career and includes previously unheard material, live tracks, unique mixes created for the film and this release, along with dialogue from Bowie himself.

Highlights include a previously unreleased live medley of 'The Jean Genie / Love Me Do / The Jean Genie’ recorded live at the final Ziggy Stardust concert at Hammersmith Odeon in 1973, featuring Jeff Beck on guitar. Other rarities include an early version of the Hunky Dory favourite ‘Quicksand’ and a previously unreleased live version of ‘Rock ’n’ Roll With Me’ from the legendary 1974 ’Soul Tour’. 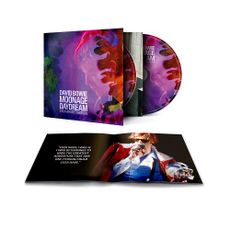