Follow us Follow us
Home  | john higgs - love and let die : bond, the beatles and the british psyche

Love and Let Die : Bond, the Beatles and the British Psyche


The Beatles are the biggest band there has ever been.

James Bond is the single most successful movie character of all time. They are also twins. Dr No, the first Bond film, and 'Love Me Do', the first Beatles record, were both released on the same day - Friday, 5 October 1962. Most countries can only dream of a cultural export becoming a worldwide phenomenon on this scale. For Britain to produce two on the same windy October afternoon is unprecedented. Bond and the Beatles present us with opposing values, visions of Britain and ideas about male identity. LOVE AND LET DIE is the story of a clash between working-class liberation and establishment control, and how it exploded on the global stage. It explains why James Bond hated the Beatles, why Paul McCartney wanted to be Bond and why it was Ringo who won the heart of a Bond Girl in the end. Told over a period of sixty dramatic years, this is an account of how two outsized cultural monsters continue to define our aspirations and fantasies and the future we are building. Looking at these touchstones in this new context will forever change how you see the Beatles, the James Bond films and six decades of British culture. 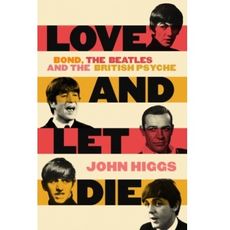