Follow us Follow us
Home  | eddie piller - clean living under difficult circumstances : a life in mod – from the revival to acid jazz

Clean Living Under Difficult Circumstances : A Life In Mod – From the Revival to Acid Jazz


The ultimate mod memoir - from Britain's best-known 'face', with a foreword by Paul Weller.

'Eddie was there very early doors. His story is of the many' - Paul Weller
'A total riot! Takes me right back to the 70s. A Superb book' - Mani, The Stone Roses
'What a wonderful book. Mod isn't about what decade you lived in, it's about your attitude, and this book has tons of it' - Kenney Jones, The Small Faces

This is the memoir of a teenage mod from the East End of London. A journey of discovery for a schoolboy dabbling with punk, funk, record shops, discos and clothes, and then... WHAAAM!

An unstoppable wave of like-minded kids fall headlong in love with 60s mod culture, revived and reformatted for the 70s and 80s generation. Eddie Piller was one such kid. His life was changed forever. Written with humour, passion and attention to detail, CLEAN LIVING UNDER DIFFICULT CIRCUMSTANCES is perhaps the ultimate mod memoir, taking us from meeting the Small Faces as a toddler, to the 1979 Mod revival, through the more purist 1980s mod scene and eventually to Acid Jazz. A born storyteller, Eddie takes us evocatively into a world of scooters, clothes, and music.

We run with the crowd to decaying seaside towns, East End backstreet boozers and sweaty teenage gigs, all fizzing with an uncontainable excitement and often exploding into violence. Once mod touched your soul it changed the way you looked at life, unexpectedly broadening your horizons. In Eddie it awakens a can-do attitude that sees him setting up a fanzine, putting on club nights, hustling jobs in the music industry, and eventually setting up a record label. It even takes him to Ireland at the height of the troubles and to Australia where the local mods take him on a military exercise... Visceral and always entertaining, CLEAN LIVING UNDER DIFFICULT CIRCUMSTANCES is a stand-out memoir that relives the thrill of the 70s and 80s, and the movement that helped make mod the most enduring and successful British youth culture of all time. 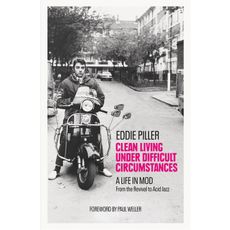