compiling an iron-clad selection of singles from across 11 albums, this bountiful retrospective takes us on one hell of a ride.

“Right from our 1985 debut ‘All Fall Down’ onward we’ve approached singles as an aesthetic choice, a statement of where we are as a band. We grew up with ‘Suffragette City’ and ‘Metal Guru’ flying out of the radio. The four Sex Pistols singles were great. ‘Public Image’ by PiL sounded like nothing else. Prince and Madonna made amazing hits. That has been our approach. I’ve always loved Top 40 pop radio, I love greatest hits albums like The Who’s ‘Meaty, Beaty, Big & Bouncy’” – bobby Gillespie. “rocks off for 31 songs from 1986-2016 in two hours” 4/5 – mojo. 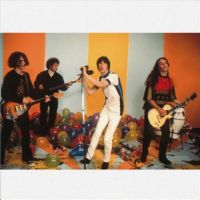