for newly found, unfinished material the audio quality is simply astounding. a great version of ‘earth blues’ kicks things off, a more forceful take than the other version with some different lyrics. ‘somewhere’ is also a different take than the one used for ‘crash landing’ &, of course, contains the original rhythm section & not the egregious overdubs. ‘hear my train a comin'‘ & ‘bleeding heart’ are both taken from jimi's first session with billy & buddy from may of 1969. ‘hear my train’ is not only electric & taken at a faster pace than normal, but it's an angry song, this time with a killer solo. ‘bleeding heart’ is nice & raw & has a very different arrangement than he ever performed live. ‘let me move you’ was recorded with saxman lonnie youngblood, who released a couple singles with a pre-experience jimi hendrix on guitar. ‘izabella’ & ‘easy blues’ are rare studio recordings by the woodstock band (jimi, billy, & mitch mitchell with larry lee on second guitar & jerry velez & juma sultan on percussion). this version of ‘izabella’ is now the earliest known recording of the song. 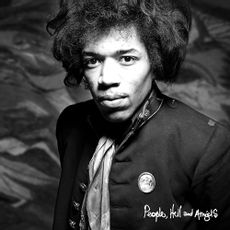