Taken from the forthcoming album of previously unreleased tracks ‘Both Sides Of The Sky’ (March 9th), this is a limited (500 only) Indies exclusive 7" vinyl release.

the B-side is an electrifying, previously unreleased, live version of ‘Foxy Lady’ (recorded in November 1967). Produced by Janie Hendrix, John McDermott and Eddie Kramer, this version (featuring Band Of Gypsys), was seen as the strongest recorded. 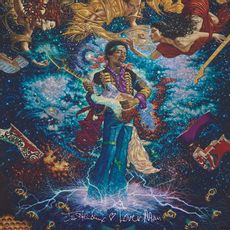