originally released in ’86, their seminal third record comes remastered with a whole lot of love & affection.

their major-label debut, this would tragically be their last album to feature bassist Cliff Burton, who died in a bus crash in Sweden during the album's promotional tour. Its driving, virtuosic music & angry, political lyrics drew praise from critics outside the metal community. it’s credited for consolidating the American thrash metal scene with its atmospheric & meticulously performed songs. *** this expanded 3cd set includes alternate versions, demos & an interview, plus a disc of live material. *** this box set includes ‘live at the aragon’ on vinyl, 10 cds of alternate tracks, live material, & interviews, 2 dvds of live material & interviews, a cassette of cliff burton’s last show, a 108-page book of never-before-seen pictures & text, buttons, a 12x12 pushead litho & handwritten lyric sheets. *** 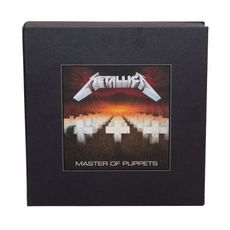