Ordinary Love, a new song written for the upcoming movie Mandela: Long Walk To Freedom, is released as a 10" vinyl pressing to mark Black Friday 2013.

The sleeve artwork features a striking painting of Nelson Mandela by Irish artist and illustrator Oliver Jeffers. The band wrote the new song at the invitation of movie producer Harvey Weinstein and the b-side of the release features a second track, 'Breathe', another song with a Mandela connection. 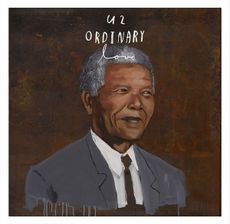