Released on 4th October 1999, Hours - David Bowie’s 21st studio album - was the first record by a major artist to be available to download in its entirety from the internet. Bowie had composed the songs for the album with guitarist Reeves Gabrels, who also appeared on the album. The Hours tour took in just eight live shows, with gigs played in London, Dublin, Vienna, Milan, Copenhagen, and on 14th October, at Paris’s Élysée Montmartre. Filmed for broadcast both in Europe and across the US, this special concert is now available on CD for the first time. Featuring a band made up of ex-Helmet guitarist Page Hamilton, Mark Plati on lead and rhythm guitar, Gail Ann Dorsey on bass, Sterling Campbell on drums and the ubiquitous Mike Garson on keyboards (who else?), this small club show is all at once dynamic, intimate, and yet somewhat extraordinary, and has to be heard to be truly appreciated. For reasons still somewhat unclear, Mr Gabrels was nowhere to be seen. 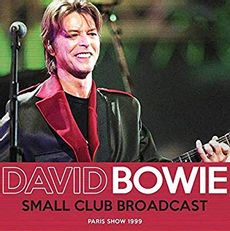