IN THE WHITE ROOM


STUNNING 1995 BROADCAST RECORDING, MADE IN THE WAKE OF THE OUTSIDE ALBUM • Following David Bowie’s critically well received and commercially successful Black Tie, White Noise album, released in April 1993 – Bowie’s first solo-effort of the 1990’s - he explored new directions on The Buddha of Suburbia, ostensibly a soundtrack album of music composed for the BBC television adaptation of Hanif Kureishi's novel.

Only the title track had been used in the TV drama, although some of his themes for the series were also present on the album. It contained more of the new elements introduced on Black Tie White Noise, and also signalled a move towards alternative rock. The album was a critical success but received a low-key release and only made No. 87 on the UK charts. • Then, in September 1995, Bowie released Outside, which re-united him with Brian Eno on a quasi-industrial collection, originally conceived as the first volume in a non-linear narrative of art and murder. Featuring characters from a short story written by Bowie, the album achieved UK and US chart success, and yielded three Top 40 UK singles. In a move that provoked mixed reactions from both fans and critics, Bowie chose Nine Inch Nails as his touring partner for the Outside Tour, visiting cities in Europe and North America between September 1995 and February 1996. • In December 1995, Bowie appeared on a special, extended edition of Chanel 4’s the White Room music show, on which he - alongside his band, made up of Carlos Alomar and Reeves Gabrels on guitar, Gail Ann Dorsey on bass and vocals, George Simms, Peter Scwartz and Mike Garson on keyboards and Zachary Alford on drums, played a quite extraordinary set lasting just short of an hour in length. • Clearly and understandably wishing to promote the new record, the band performed several tracks from such with a smattering of cuts from previous releases, although not the obvious choices, this time preferring to perform less known songs, making the entire concert something of an unusual event for Bowie fans. 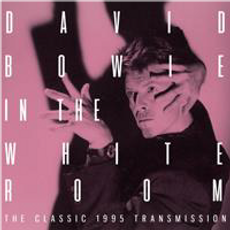