A revealing collection of interviews with the shape-shifting, genre-bending, wildly influential musician and songwriter.

Bowie was at the height of his powers when he died. The response from artists across genres confirms that his reputation is secure, and that new generations will continue to respond passionately to his work. Bowie was more than just his music: from Ziggy Stardust to the Thin White Duke and beyond, Bowie had a profound influence on art and fashion. This book will cover the whole range of his career and will thus appeal to fans of every ilk. Includes Bowie’s first interview with Cliff Michelmore on BBC Tonight, November 1964 and his last interview, an appearance on Extras, September 2006. Part of Melville House’s popular The Last Interview series: a collection of pocket-sized interview collections, featuring conversations with some of the most iconic writers and thinkers of our time. The latest addition to The Last Interview series concentrates on the late great David Bowie. Bowie was famous for his fascinating refusal to stay the same–the same as other trending artists, or even the same as himself. In this remarkable collection, he reveals the fierce intellectualism, artistry, and humor behind it all, in candid discussion about his sexuality, his drug usage, his sense of fashion, how he composed, and more. It is a must-own for all Bowie fans. 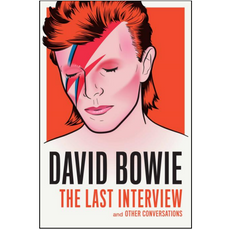