Their first three albums, which the band wrote, all reached the UK Top 30, with ‘Youthquake’ reaching the Top 10. In the 1980s, they charted seven unique singles in the UK Top 40, with two further re-entries this century, with a remix and original version of ‘You Spin Me Round (Like A Record)’. Respected US magazine Billboard, ranked them in their all-time Top 100 most successful ‘dance artists’ chart. Recorded at PWL Studios, London, “Nukleopatra” is the Band’s sixth studio album and was initially released in Japan in 1995, although subsequently released in different versions - track listing/versions/durations/artwork - in eight other countries between 1996 and 1998. It contains the singles ‘Rebel Rebel’ and ‘Sex Drive’. The album was not released in the UK, until a re-worked version was included within the ‘Sophisticated Boom Box MMXVI’ box set in 2016. This vinyl edition replicates the original Japanese version, which features longer versions ‘Nukleopatra’ and ‘Sex Drive’, along with rerecorded versions of ‘Unhappy Birthday’ and ‘Gone Too Long’, which appeared on “Fan the Flame (Part 1)”. 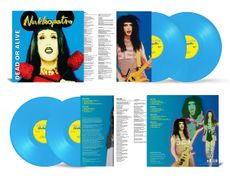