WHERE ITS AT IS WHERE YOU ARE

London indie label wiaiwya is equaly baffled and thrilled to be putting out the new single from LEE SCRATCH PERRY. From the opening chimes of the famous bell (silent now until 2021) to the closing gongs and bongos, this is a rockabilly big beat glam ragga rock headrush, with a nod to Sergio Leone... exactly what you would expect when Woodie Taylor remixes Lee Scratch Perry, fronting Morrissey’s sometime band... "Give me a rock beat, like Meatloaf..." Not a request that you get every day but then it's not every day you're taking orders from the legend that is Lee Scratch Perry! I lived near the Mad Professor's studio in South London and had sold him a few bits of recording equipment. He knew that I had played drums with Morrissey, that I was a reggae fan and asked if I'd be interested in playing on a session. I'd started doing a bit of production and when the track didn't get round to getting finished they agreed I could remix it. This is the fruit of my labours, with contributions from Boz Boorer (Morrissey/ Polecats), Jonny Bridgwood (Morrissey/Marianne Faithful) and Anthony Miller (Data/Friday Club). There's simply not enough Big Ben rocking these days and remember: "If you don't rock you're gonna get a big shock!" Woodie Taylor, 2019. Lee Scratch Perry founded Upsetter Records in 1968.He pioneered Dub, produced Bob Marley, allegedly burnt down a studio, and worked with the Mad Professor, the Clash, Adrian Sherwood and the Beastie Boys. Woodie Taylor has been rockin' on record since the early 80's. He first appeared on 45 as a member of the Daleks, then drummed for psychobilly legends the Meteors. In the '90's he was in Drive (with, the soon-to-be All Saint, Melanie Blatt). He played on Morrissey's Vauxhall & I LP and has provided the rhythmic backbone of cult Indie heroes Comet Gain for two decades. He has produced albums by Love Is All, Comet Gain, Proper Ornaments and Shrag. Boz Boorer has been Morrissey's co-writer, guitarist and musical director for the best part of three decades. He is also a founding member of rockabilly legends, The Polecats. Jonny Bridgwood played bass on three Morrissey albums and double bass on five Kathryn Williams albums. He has worked with Siouxsie Sioux and Adam Ant and toured with Marianne Faithful. Anthony Miller - Played trumpet with the Friday Club and appears on their very collectable 2 Tone single, Window Shopping. Was a member of the 90s Sirkus Records artists Data, along with Woodie Taylor and recording industry supremo Nick Huggett. The record was mastered by Graeme Durham, who has also worked on discs by Grace Jones, Bob Marley, U2, Fourtet, King Tubby and Frankie Goes to Hollywood… Track listing A Big Ben Rock (Woodie Taylor Remix)’ B1 Steady B2 J'ai Tout Lu 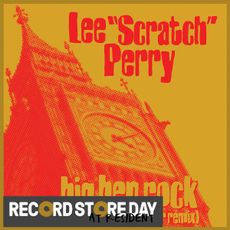