Donovan is one of the musicians who defined the 1960s.

From his humble, working-class roots as a teenager with big dreams, he rose to become an icon of the times, the troubadour of the flower power generation. His story is one filled with tales of romance, legendary friendships, and screaming fans. But it's also the story of a spiritual journey and of a personal mission to bring his message of love to the world. Most of all, though, it's about the music. Defying the press who dubbed him a mere Dylan imitator, Donovan found his own unique voice and produced some of the most creative and enduring music of the '60s; songs that captured the imagination with memorable melodies and poetic, thought-provoking lyrics. He transcended his folk roots to blend in rock, pop, jazz, classical and world music elements like no one had done before. The mythical, magical decade of the 1960s was the time that Donovan made his mark on the world. This book tells his story through a deep dive into the music he created in those times, including new insights from John Cameron, who arranged and played on many of Donovan's classic songs of the era. 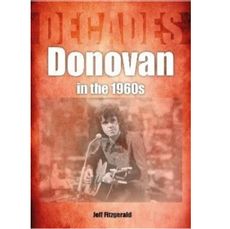