Faster Than A Cannonball 1995 and All That


Decades tend to crest halfway through, and 1995 was the year of the Nineties: peak Britpop (Oasis v Blur), peak YBA (Tracey Emin's tent), peak New Lad (when Nick Hornby published High Fidelity, when James Brown's Loaded detonated the publishing industry, and when pubs were finally allowed to stay open on a Sunday).

It was the year of The Bends, the year Danny Boyle started filming Trainspotting, the year Richey Edwards went missing, the year Alex Garland wrote The Beach, the year Blair changed Clause IV after a controversial vote at the Labour Conference. Not only was the mid-Nineties perhaps the last time that rock stars, music journalists and pop consumers held onto a belief in rock's mystical power, it was a period of huge cultural upheaval – in art, literature, publishing and drugs. And it was a period of almost unparalleled hedonism, a time when many people thought they deserved to live the rock and roll lifestyle, when a generation of narcotic omnivores thought they could all be rock stars just by buying a magazine and a copy of (What's the Story) Morning Glory? Faster Than a Cannonball is a cultural swipe of the decade from loungecore to the rise of New Labour, teasing all the relevant artistic strands through interviews with all the major protagonists and exhaustive re-evaluations of the important records of the year – The Bends by Radiohead, Grand Prix by Teenage Fanclub, Maxinquaye by Tricky, Different Class by Pulp, The Great Escape by Blur, It's Great When You're Straight... Yeah! by Black Grape, Exit Planet Dust by the Chemical Brothers, I Should Coco by Supergrass, Elastica by Elastica, Pure Phase by Spiritualized, ...I Care Because You Do by Aphex Twin and of course (What's the Story) Morning Glory by Oasis, the most iconic album of the decade. Dylan Jones said: ‘The Nineties are often framed only as a time driven solely by Britpop, but the decade was an intoxicating period of cultural insurrection and social change. It was also the last analogue decade, where the forces of creativity rushed to finish the century in style. In art, music, politics, fashion, media, sport and the cultural world of the underground, the decade easily equalled the Sixties in scope and ambition.’ Lee Brackstone said: ‘With his book on Bowie and Sweet Dreams, his account of the new romantic moment, Dylan Jones proved himself to be a master of the oral history. Faster than a Cannonball is further evidence that no one is pushing the form further, working it harder, than Dylan. The last decade of the 20th century remains perhaps the most divisive and contested in the recent history of pop culture. Whether you think it was all recycled bollocks or magnificent retro-restyling of (principally) sixties sensibilities, Faster than a Cannonball will shock, entertain and surprise readers across its 500 glorious pages.’ 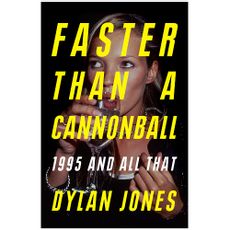