Follow us Follow us
Home  | books  | paul terzulli & eddie otchere - who say reload: the stories behind the classic drum & bass records of the 90s

WHO SAY RELOAD: THE STORIES BEHIND THE CLASSIC DRUM & BASS RECORDS OF THE 90S


Knockout oral history of the records that defined jungle/drum & bass.

Who Say Reload is an oral history of the records that defined jungle/drum n bass straight from the original sources. The likes of Goldie, DJ Hype, Roni Size, Andy C, 4 Hero and many more talk about the influences, environment, equipment, samples, beats and surprises that went into making each classic record. Photography is provided by Eddie Otchere who has an extensive archive of images, having been the photographer at Goldie’s seminal Metalheadz nights. His previously unseen visuals capture the essence of the music in a way that only someone who was fully immersed in the culture at the time could, and are the perfect accompaniment to the story being told. Reviews “Who Say Reload is essential reading for fans of the golden era of 90s drum n bass” - J Majik “Nice to see a different take on DnB’s history as Who Say Reload captures the early productions that laid down the music’s foundations.” - LTJ Bukem “Jungle is the most unique and influential musical movement to come out of England. It’s important that the pioneers get to tell their stories like this. It’s great to see underground legends represented and put on a platform that highlight their contributions to a music genre that has become a worldwide phenomenon.” - Mampi Swift 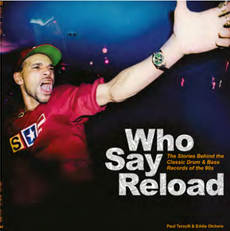