When you don't wanna go down to the pizza restaurant, whip up these vegan pizzas at home.

When you don't wanna go down to the pizza restaurant, whip up these vegan pizzas at home. Automne Zingg, genius mastermind behind Comfort Eating with Nick Cave, Defensive Eating with Morrissey (both Microcosm, 2016), and Enter Sandwich (Microcosm, 2022) has illustrated dozens of pizza-themed Ramones homages, as they eat pizza, sneer at pepperoni, and play giant, dripping slices like guitars. Joshua Ploeg's recipes wittily incorporate lyrics from across the band's history. Pizzas range from traditional marinara with vegetables and veggie sausage (Texas Chain Sauce Massacre) and white sauce specials (Carbonara Not Glue), to variations like Beet on the Brat, Havana Pizza Affair, Thyme Bomb. 'Well, I'm Against It,' comments Johnny, but you'll find a pineapple pizza recipe in here as well. Deeper in the book the toppings get wilder: french fries, mac n' cheeze, tortilla chips, and whatever's in the fridge. Recipes for sauce and crust variation and pizza-adjacent snacks are all in the mix. The pizza form is deconstructed, reconstructed, and, like the best bands, turns into something far better than the sum of its parts. Second slice, same as the first! 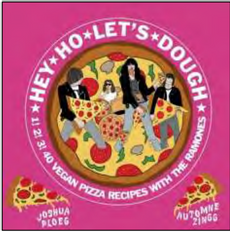