Pandamonium! How Not to Run a Record Label


An honest and astonishing memoir by Fierce Panda record-label founder Simon Williams, charting his love affair with indie, his music-industry successes and his heartfelt personal struggles.

'Open, entertaining and extraordinarily poignant.' STEVE LAMACQ It's a life-and-near-death story. But whose life? And whose near-death? As a one-time NME journalist, former XFM radio presenter and the founder of enduring homespun British indie record label Fierce Panda, Simon Williams has been at the cutting edge of all things indie for over thirty years. During his time as managing director of Fierce Panda (a role he holds to this day), Simon was responsible for discovering bands such as Coldplay, Keane, Placebo and countless other acts of independent hue - some of whom have gone on to achieve earth-shattering musical superstardom, while others have merely packed out the Bull & Gate in north London on a wet Wednesday evening. Now , Simon's fascinating memoir - filled with insider anecdotes to entertain music enthusiasts everywhere, from the origins of a bootlegged Oasis release to Chris Martin's delight at reaching number ninety-tw o in the chart - tells the unfiltered story of his time at the indie coalface. But it is also the story of how he tried to take his own life on New Year's Eve 2019. Documenting in blunt, matter-of-fact detail both his suicide attempt and his recovery, Simon reflects on his father's suicide and the lifetime of mentalhealth challenges triggered by that formative event. Yet, despite Simon's raw and unflinching honesty, this book is written with warmth, wit, self-deprecation and the w ide-eyed good fortune of someone who has stared into the abyss and survived, going down a few musical rabbit holes along the way. 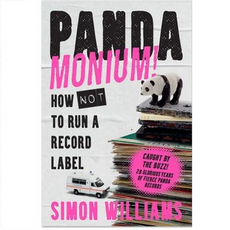