Goin’ Down De Mont catalogues more than 60 years of musical history as witnessed at the most iconic music venue in the East Midlands, Leicester’s De Montfort Hall.

Told through the eyewitness accounts of over 200 fans and celebrity musicians, this book documents the hundreds of concerts that De Mont has hosted, from teenage girls in the Sixties screaming at The Beatles and the Rolling Stones, through Seventies visits by rock giants David Bowie, Led Zeppelin and Black Sabbath, and on to modern day purveyors of rock – Simple Minds, OMD and Kasabian. Packed with memories and previously unseen images, Goin’ Down De Mont brings bring back musical memories going back all the way to the birth of rock ‘n’ roll. 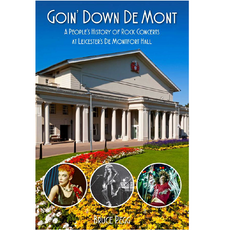