"Pinkard's account brings to light the ambition and artistry, the stress and frustration, and ultimately the joy of making this very special album.

"-Peter Katis, The National's engineer, and mixer on Boxer"I am spooked by how well [Pinkard] has captured these characters and this madcap project. I am not sure how he did it." -Carin Besser, co-lyricist on Boxer and wife to Matt Berninger"Accessible, perceptive, sometimes hilarious, but more often harrowing, Pinkard's book gets a running start on its subject, tracing The National's trajectory from their first notes together to the creation of Boxer." -Stephen M. Deusner, music critic and authorWe all know the Boxer. The fighter who remembers every glove but still remains. That grisly, bruised American allegory who somehow gets up more times than he's knocked down. This is the fight that nearly broke The National. The one that allowed them to become champions. Released in 2007, The National's fourth full-length album is the one that saved them. For fans, Boxer is a profound personal meditation on the unmagnificent lives of adults, an elegant culmination of their sophisticated songwriting, and the first National album many fell in love with. For the band, Boxer symbolizes an obsession, a years-long struggle, a love story, a final give-it-everything-you've-got effort to keep their fantasy of being a real rock band alive. Based on extensive original interviews with the fighters who were in the ring and the spectators who witnessed it unfold, Ryan Pinkard obsessively reconstructs a transformative chapter in The National's story, revealing how the Ohio-via-Brooklyn five-piece found the sound, success, and spiritual growth to evolve into one of the most critically acclaimed bands of their time. 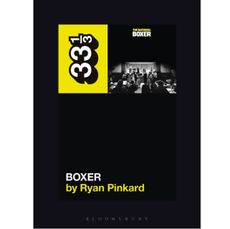