receiving the 20th anniversary "definitive remaster", this 1994 album is widely considered to feature some of Morrissey’s best output post The Smiths.

While it isn't a gutsy rock & roll record like 'Your Arsenal', 'Vauxhall & I' is equally impressive. Filled with carefully constructed guitar pop gems, the album contains some of Morrissey's best material since the Smiths. Out of all of his solo albums, 'Vauxhall & I' sounds the most like his former band, yet the textured, ringing guitar on this record is an extension of his past, not a replication of it. In fact, with songs like "Now My Heart Is Full" & "Hold on to Your Friends," Morrissey sounds more comfortable & peaceful than he ever has. "The More You Ignore Me, the Closer I Get," "Speedway," & "Spring-Heeled Jim" prove that he hasn't lost his vicious wit. The 2CD edition includes a previously unavailable concert recorded at the Theatre Royal, London, 1995. 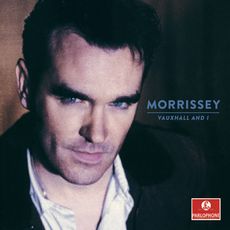